Now that we have the high-level benefits or reasons to consider Hyper-V 2012 R2 and Nutanix lets get into some of the configuration details. I’ll first show how it was done before Nutanix because it really helps show the transformation in the design. The typical virtualization environment before Nutanix consisted of these physical components:

In the converged configuration the network and storage network are combined.

Using Nutanix (3000 series or higher) your virtualization environment will typically consist of:

Virtualization Host (node): 3 at a minimum for redundancy and load distribution

This is what a Nutanix block looks like in it’s 1000 and 3000 series which can hold up to four nodes.

From the physical aspect, things are are much more simplified with Nutanix. There’s still the separation of storage, compute and networking but storage and compute shared the same physical space. This is where the convergence comes into play. When we add the hypervisor layer (software) to the hardware we get the hyper-convergence. The hypervisor in this case is Microsoft Hyper-V 2012 R2. Without the hypervisor in this architecture nothing works because it’s what sits directly on top of the hardware.

In the other architectures there was physical separation of the roles for network, storage and compute but now it’s separated by leveraging virtualization. The storage in particular is the key component that Nutanix brings to the table in the form of multiple controller virtual machines (CVM) distributed to each host node. 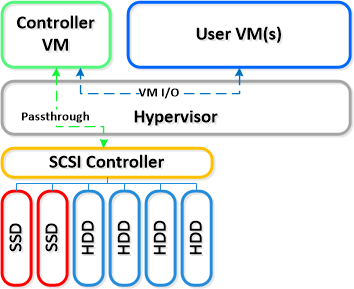 The deployment process usually consists of these tasks:

Deployments may vary so don’t take this as gospel.

Typical issues during the Nutanix deployment with Hyper-V that I’ve seen usually consists of:

None of these are directly related to Nutanix or the Nutanix storage cluster. Next we can get into the Hyper-V side of things.